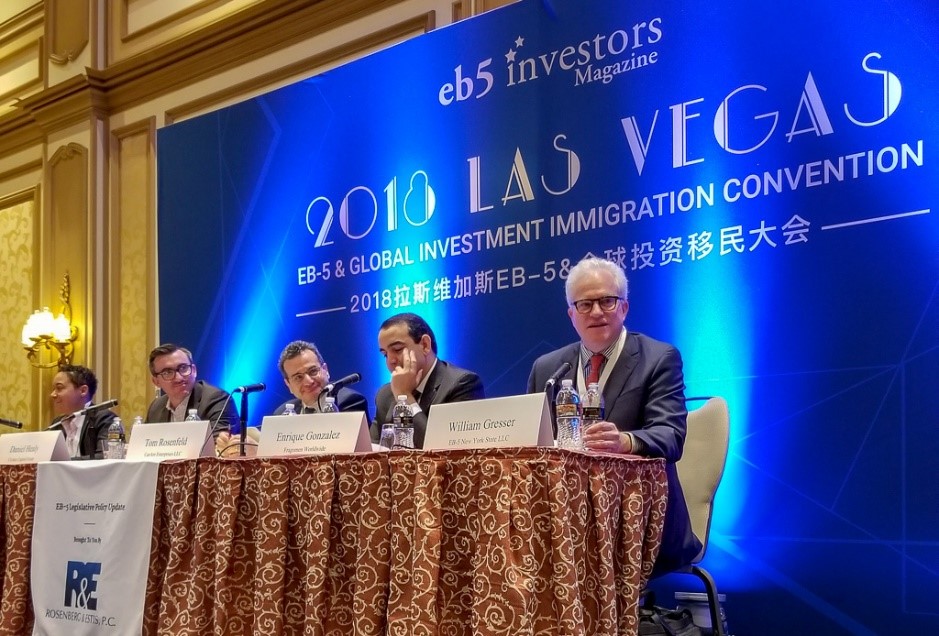 The panelists discussed the likelihood of legislative changes to the EB-5 program in 2018 and the impacts of potential legislation. The panelists discussed the EB-5 program in the context of the larger US immigration debates. Bill and his fellow panelists focused on the key legislative issues for stakeholders in the EB-5 industry: Targeted Employment Areas (TEAs), the push for an increase in EB-5 visas and minimum investment amount increases.

Bill focused on the changes which may come from either (1) legislative changes (new law) passed by the US Congress or (2) changes from Regulation promulgated by the US Department of Homeland Security.  Potential legislative changes which are being discussed in Congress may include needed integrity reforms, tightly defined targeted urban employment areas, visa set asides for rural and high unemployment urban areas, a 5 or 6-year re-authorization, coupled with increases in minimum investment amounts (from the current $500,000, up to $925,000 to $1,025,000).

The other mechanism for changes are regulations from the Department of Homeland Security (DHS).  The DHS proposed regulations include changes which would tighten the definition of Targeted Employment Areas (but not as tightly defined as in the legislative proposals) and would greatly increase the minimum investment amount (up from the current $500,000, up to $1.3 million in a TEA or Rural area and $1.8 million per investor in all other areas).  Of particular importance, the DHS’ regulatory changes cannot include the same integrity reforms and cannot reauthorize (or extend) the program – only Congress can make those changes.

Bill also stressed that although many in Congress support legislative reform, even if there is a compromise on an EB-5 legislative reform package, there must be a legislative vehicle (like the upcoming Omnibus bill expected to pass by March 23, 2018) upon which the EB-5 legislation would “ride.”  The EB-5 program cannot realistically be passed on its own, and the upcoming Omnibus bill is the next appropriate legislative vehicle upon which the EB-5 program could be passed.  Again, the Omnibus bill is expected to pass by March 23, 2018 with the end of the current continuing resolution.

Finally, Bill answered questions about the legislative and regulatory uncertainties which exist in the EB-5 program today and the challenges and opportunities that those uncertainties create for Regional Centers and project developers. The key, Bill stated, is the importance of planning for uncertainty in both Regional Center and EB-5 Investment Project design.